I groggily opened my eyes to find a woman hardcore staring me down. This must be the pardonnez-moi culprit.

I stood up, not altogether sure where I was. Then I saw my friend, Mary Sue, flipping through a brochure about Toulouse. That’s right, we were on a weekend trip to Toulouse. I’m not usually this disoriented. Then again, I’m not usually asleep in public.

Mary Sue and I went to the same university but never crossed paths until we studied abroad in Paris. Funny how life works. This is us about a week after meeting — we were fast friends. 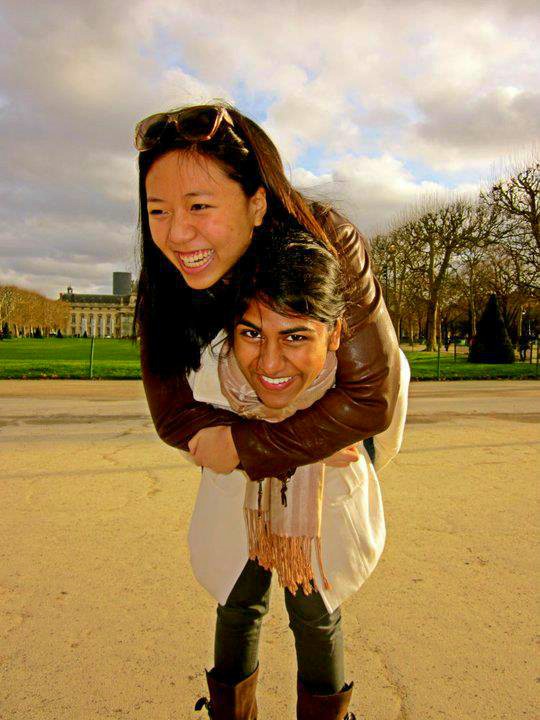 Upon waking up, I rallied. Mary Sue and I toured museums, art exhibits, parks, and churches. The weekend was wonderful, except for all the stuff that went wrong.

We stayed in a hostel located outside of Toulouse proper. The place was clean and the staff was superb – the latter stood out because we had come from Paris where the service industry is as unfriendly as it is in New York City. We were very happy with our hostel choice, except that because of its location, we had to take the bus in and out of Toulouse. Our first day there, we were at a museum when Mary Sue noticed she didn’t have our hotel key. Which, it should be noted, was an actual key, not a keycard. Uh oh.

We made the collective decision to wait to obsess over the missing key until we were on the bus back to our hostel. Neither of us could really stick to that, so our day was filled with queries like:

“What if we have to pay for a replacement since it’s a real key, not a keycard?”

“What if the reception desk is closed because we get back too late?”

When we got back to our hostel, the reception was still open. We started to explain our predicament to the receptionist but she stopped us. Someone had found the key near a field and drove all the way to the hostel to drop it off. Mary Sue and I were shocked and grateful. If this had been another city, the person who’d found the key probably would have come to the hostel and ransacked our room.

The next day, after more site-seeing, we boarded a bus back to our hostel. At this point, I’m not 100% clear on what happened, but I think we took the wrong bus. Or we had been on the right bus but got off too early. Either way, we had gotten off the bus and started walking when Mary Sue said that she didn’t recognize anything. I took a good look around and didn’t recognize anything either… and we didn’t have a cell phone … and there wasn’t a person in sight.

I suggested that we knock on someone’s door, explain that we were lost, and ask for help. Mary Sue was not keen on that idea. Who knew what kind of pyscho we might run into that way, she said. So we made that plan b.

We found a map in one of the tourist center brochures and tried to locate ourselves without much luck. At this point, we were especially concerned because the buses were about to stop running. Luckily Mary Sue had her Kindle. Long story short, she was able to get us back to the hostel. Then there was the question of how to get to the airport next morning… but that’s a story for another time.

Though our trip was fraught with complications, who can complain after a weekend in a city like this?

6 thoughts on “the time everything went wrong”